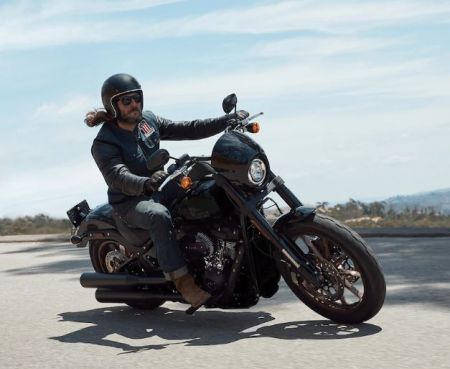 The lean, mean, burnout machine is back. When Harley-Davidson launched the Low Rider S in 2016 with its Screamin’ Eagle tuned 110 engine, it was an instant hit. But it was only in the range for two years before the Dyna line-up became the Softails, so used ones now sell for more than the original RRP. For 2020 its back alongside a whole load of new tech for the tourers.

The centre-piece of any Harley is its engine and the new Low Rider S comes with the 114ci version of the Milwaukee-Eight powertrain. This 1868cc behemoth puts out a whopping 119ftlb of torque at 3000rpm, which is more than the old v-twin Panigales.

The engine breathes through Gloss Black ventilator intake and blows through a set of 2 – 2 shotgun pipes. Naturally the handling has received an update too.

The Low Rider S joins all the rest of the Dyna family by replacing the old twin shock swingarm with a softail frame supported by a hidden monoshock. The front end now features a set of 43mm USD forks, which should improve things over the old RWU models, while rake has been reduced by two degrees to sharpen things up even further.

To give it that cool custom look everything on the motor and frame has been blacked out, there’s a skinny set of bars on four-inch risers and it’s got a West Coast style mini screen. It comes in Black and Silver, but Black is the one to have.

It’s a good day to be a tourer too. For 2020 the Touring range is getting the Reflex Defensive Rider System, which is a fancy way of saying they’re getting all the electronics that other brands' tourers have had for years.